Home World The BBL surgery 'that only the Kardashians could have' becomes dangerous TikTok...
World 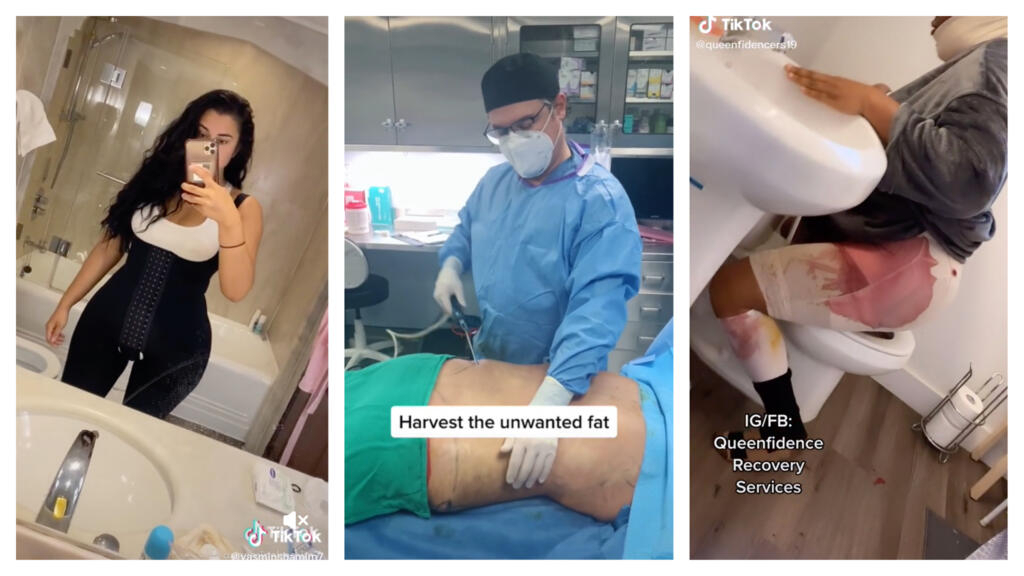 Driven by social media trends, the Brazilian Butt Lift (BBL) has become the world’s fastest growing cosmetic surgery, despite mounting concerns over the procedure’s high mortality rate. The operation involves removing fat from various parts of the body and then injecting it into the buttocks. It’s the procedure du jour for celebrities and influencers, who have been using platforms like TikTok and Instagram to promote their “sticky-outy” bottoms and post images of them before and after surgery.

The procedure’s popularity has even led to a TikTok meme called the “BBL Effect”, which has reached over 186 million views. Coined by creator Antoni Bumba in late April, the BBL Effect pokes fun at the recipients of the procedure, and how it inadvertently changes their attitude, giving them an unbothered air of confidence.

However, despite the popularity of the procedure, it carries deadly risks. Complications can include wound infection and fat embolus, where fat can enter the bloodstream and block vessels. Many women have died as a result of complications arising from BBLs. According to local reports, in recent years, 15 women have died after BBLs in south Florida alone.

Our Observer Helly Larson is a New York-based podcaster and dancer. In 2019, she got her BBL done in America’s plastic surgery capital: Miami. Since then, she has been warning women about the dangers of the operation on TikTok.

The main reason I got my BBL was because of social media. I kept seeing people with BBLs all over TikTok and I wanted to look just like them. It used to be a mysterious, unattainable procedure that only the Kardashians and celebrities had. Now, every time you’re scrolling through your ‘For You’ page [on TikTok], you come across somebody in their early 20s or late teens that has had access to the type of money needed to get the procedure. It has become normal.

The amount of comments I see of young women tagging their friends saying ‘We have to do this as soon as we turn 18’ is alarming. Because your body hasn’t even developed by the age of 18. The sad thing is that the beauty standard is now an enhancement. It’s not just a body type. It’s something that most people aren’t born with. The people who we idealise with these bodies don’t even have these bodies. They were doctored.

Helly Larson found her doctor through an influencer who had promoted him in a YouTube video and whose name she wants to keep anonymous. Helly had wanted the operation for months, mostly to help her advance in her career as a dancer. Everything seemed normal – until the day she had been waiting for finally arrived.

Red flags didn’t start to pop up until the day of my surgery. As soon as I arrived at the clinic, I immediately felt like a number. I was supposed to have my operation at around 10am, but I was still in the waiting room at 2pm. My doctor had given about five BBLs before I had mine. I could tell that it was just a money-making business. The staff were so friendly with me before I made my payments, but while I was waiting at the clinic before my operation, they were cold and distant.

I saw very plus-sized bodies in the waiting room for their BBLs, even though they shouldn’t get the procedure because they need to be at a certain BMI for it to be safe and for the effects to last. But doctors were just operating on them anyway, so that they could get their fat pay checks.

I didn’t have the strength to back out, nor did I have the willingness to lose the 10,000$ because you don’t get your money back. So I went through with it. It’s a very invasive operation. The surgeons use a metal rod that they stab inside of you and push at your skin.

Then, there was the healing process, which lasts about a year. It was the worst experience of my life. During the whole healing phase, I cried to my mom asking her why I had ever decided to get my BBL. I just remember being so upset at myself for putting myself through so much pain for looks.

My bed was covered in blood because of my leaking wounds and I had bruises all over my body for weeks. When you can’t use your body, when you are in that much pain, it definitely starts to affect your mind.

‘The bodies that we see on social media don’t exist’

Helly Larson told us that one of the main reasons why social media plays a key role in the increase of BBLs is because of the editing that takes place before photos are published. Indeed, apps like Instagram and Facetune enable users to edit photos of their bodies before posting them on social media. The BBL has thus become an attempt to recreate the way bodies are filtered through the internet.

That was the biggest wake-up call for me when I got my BBL – it was realising that people don’t just have surgery, they have a surgery, and then a second or third surgery, and then they edit on top of that so my expectation was literal perfection based on what I had been seeing online. Even doctors will repost photos that girls have edited.

During the pandemic, it only got worse. We’ve been doing more selfies, we’ve been on TikTok, we’ve been looking at ourselves constantly because there’s always that little screen of us. It’s got a lot worse, and it’s not going to get better, it’s going to get worse.

The solution would be allowing women to look how they want to look and not having a trend every few years that women have to constantly keep up with. But that would mean that some people would have to give up their fat pay checks so they’re not going to. And that’s the saddest part. We’re just watching it get worse without any solutions.

According to a multi-society task force, which includes the International Society of Aesthetic Plastic Surgery, one in 3,000 people die from getting BBLs, making it the single most deadly procedure in cosmetic surgery. Most of these deaths occur in places like the Dominican Republic, Mexico or Turkey, where the operations are significantly cheaper. Doctors at these high-volume centres may not be board certified or even surgeons.

Doctors have warned people wanting to get a BBL about the importance of doing their research first. Resources like certificationmatters.org and the American Board of Plastic Surgery allow people to look up doctors’ certifications in particular areas. The multi-society task force also released an advisory to warn surgeons performing BBLs about the risks, and to provide them with a series of guidelines with the objective of “dramatically improving patient safety”.

Jaishankar flags ‘sharpening of tensions’ across Asia amidst China’s rise

News and Culture From Jammu and Kashmir, India

Have a news tip? An insight to a breaking story that you want us to unbreak? Mail us: jammuobserver@gmail.com